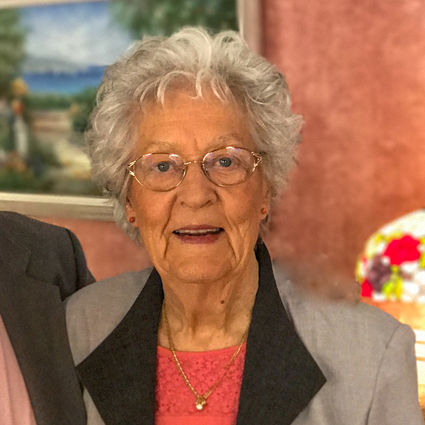 Mildred (Millie to her many friends), was born in Whitney, NE to Marcellus and Ellen (Anderson) Jacobs. She was the youngest in her family with 3 brothers and 5 sisters. They all called her "Babe" and the nickname has stuck to this day, through the generations.

Her family relocated 9 times before she was 10 years old. Crisscrossing the country, they finally ended up in Kimball, NE (for a while).

Mildred graduated from Kimball High School in 1946. On August 14, 1947, she married Duane Tobler in Kimball, NE. They were married for more than 72 years. Mildred and Duane raised their 4 children in Dix, NE.

Mildred worked at the Dix grocery store, Kimball Post Office and for the Farm Bureau. She also worked at the Post Office in Rawlins, WY after Duane was transferred there by the UPRR. Her number 1 job was always to take care of her family. She was a loving wife and a spectacular Mom, Grandmother and Great-Grandmother.

Mildred and Duane retired and moved to Las Vegas, NV in 1987. They both had a lot of fun playing golf, or at least trying! They liked playing casino games and betting on sporting events and horse races. They also really enjoyed the buffets!

Mildred passed away in the hospital after an extended illness. Sadly, she along with hundreds of thousands of other Americans, died alone, because of the "dangerously incompetent" response to the COVID-19 crisis by the Trump Administration.