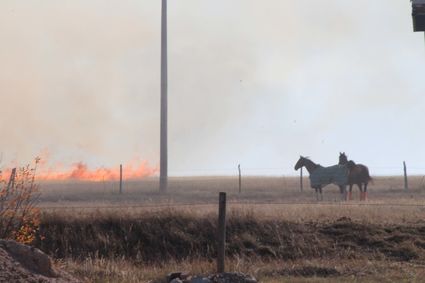 Last week's Horseshoe Hill grassfire loomed near horses as the Kimball area continued to deal with hot, dry, windy conditions. Below: Clouds of smoke rise from the Oct. 12 grassfire in the Dix area that firefighters from around the area fought.

A grassfire burned about 20 to 30 acres on Horse Shoe Hill, south of 9th Street on Wednesday, Oct. 7, according to Kimball Fire Chief Andrew Bohac.

A worker was in the area of County Road 43 and was either using a welder or grinder, which produced a spark.

No structures were damaged, although the fire came close to a few buildings owned by Brandon Mossberg. 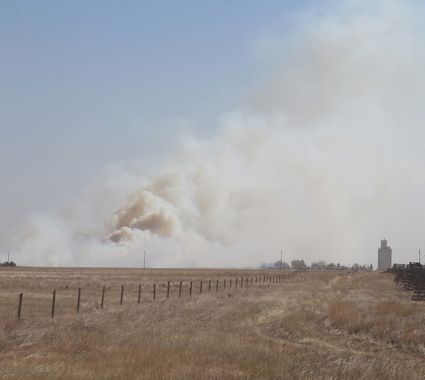 "It just burned up the grass," Mossberg said. "Everything else for the most part was good."

On Monday, Oct. 12, the Kimball Volunteer Fire Department responded to a fire just north of Dix.

A baler was blamed for the fire, which was fanned by high winds.

Bohac said Kimball firemen had a lot of help fighting the blaze from other fire departments. They were called out about 10:40 a.m. and returned to town about 1:30 p.m. after getting control of the situation.