Loved Ones Gather To Support Dix Woman In Neighborhood Conflict 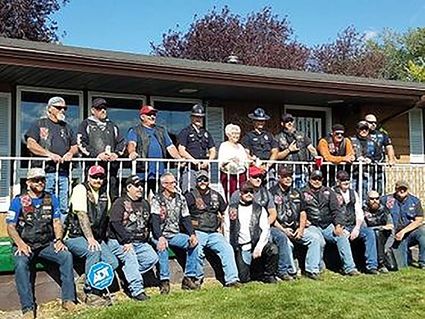 Mary James, center, and her "guardians" assemble Saturday during a party where they showed her "she has people in her corner" regarding a neighborhood problem in Dix.

Mary James of Dix said, "I am just going to sit back and enjoy my party."

And party they did on a beautiful Saturday afternoon Oct. 3, they partied on the front and side lawns of Mary's home just across from the Potter-Dix Elementary School.

There were tents and tables, and Mark Whetham had BBQ brisket and pork, salads and birthday cake. There was music and beer and about 100 guests.

Mary continued to express her appreciation.

"It was really good of these kids to do this."

For two years, Corey Sell, riding with Road MC has been trying to have a party to show support for 92 year-old Mary as she struggled with a long time neighborhood conflict.

Sell said, "I don't believe anyone should have to deal with this, let along a 92-year-old women who lives by herself."

With only a week to plan the party, Sell heaped praise on all those who helped.

"Mary just turned 92 a couple of weeks ago and this is about Mary," Sell said.

"I spoke with Mary about a week ago and she didn't want us to get mixed up with this, but I am not scared of them and Mary needs to know that she has people in her corner," Sell said.

The long time battle has landed the neighbor in court numerous times over the past 35 years.