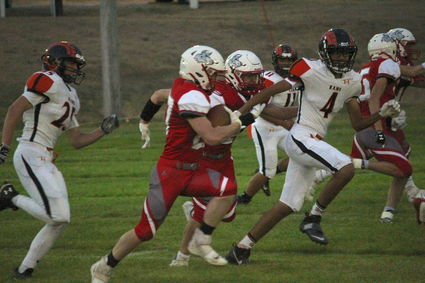 Potter-Dix senior Donnie Moench runs to the outside in the first quarter of the Coyotes' 46-8 victory over Crawford Friday night in Potter.

Potter-Dix's Coyote Football team has something to howl about as they move their season record to 3-and-0 for the first time in well over a decade with a 46-to-8 rout of the visiting Crawford Rams at Combs Field on Friday.

It was Homecoming Night, and a fired up crowd was geared up to see a depleted Rams roster try to give the Coyotes their first loss of the season, but it became clear early on that the Rams would not be able to stop the high-powered Potter-Dix offense. After Crawford started and lost 15 yards over three plays to force a fourth-and-30 punt, Potter-Dix sophomore quarterback...