Kimball’s Grand Annual Celebration Is A Go, COVID Or Not 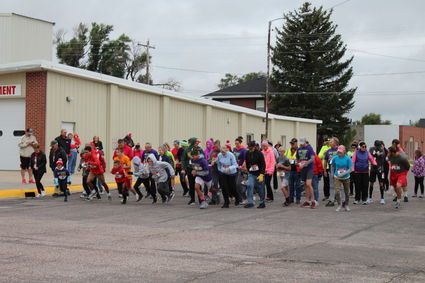 After months of Directed Health Measurers, questions and indecision, Farmer’s Day in Kimball will proceed with limited events but a full weekend of community fun.

No dignitaries are scheduled for the 95th annual event and there will be no hamburger feed. But local vendors will take up the slack Saturday as the Bearded Bastard BBQ and Klink’s will be serving wings and brisket nachos throughout the day.

The Kimball VFW also will have a cabbage burger sale at the post from 11 a.m. to 3 p.m. Saturday then at the demolition derby starting at 4 p.m.

Events Friday include the Library Book Sale from 4-6 p.m., then bike races for youth and adults beginning at 4:30.

The evening concludes with the movie, “Dolittle” at the Goodhand Theatre and Chute #7’s Victory Underground Band.

COVID also couldn’t take away the Annual Fun Run at 8 a.m. on Saturday.

An unusual parade format known as a Reverse Parade is planned for Saturday morning at 10. Parade chairwoman Sandy Dominguez said it has been tried in other communities. According to the parade form, the entries are stationary and the spectators come to them.

The location of the Reverse Parade is 1st Street and the time is from 10 to 10:45 a.m. There is still time to get your float or vehicle into the stationary parade, although no prizes will be awarded this year.

In addition, rumors are circulating that state Sen. Steve Erdman from the Nebraska Unicameral 47th District will be in attendance.

Activities in the afternoon move to the Gotte Park area as the Horseshoe Tourney goes on Saturday and Sunday. The Historical Society Gun Raffle will draw 50 winners at 2 p.m. Saturday,

Meanwhile, a cornhole tournament will take place at Gotte Park followed by everyone’s favorite, the demolition derby at the fairgrounds at 4 p.m.

According to the man in charge of the derby, Tyson Culek, the Kimball County Ag Society has 30 or more cars that want to participate in the derby. He said he has had inquires not only locally but from Wyoming, Colorado and eastern Nebraska.

The $5,000 purse is pretty good incentive for the derby cars. The kids Power Wheels Derby is also on the agenda in what will be a must-see event for many.

The final events on Saturday are the Glow Disc Frisbee Tourney and Victory Underground Band playing at Chute #7 from 9 p.m. to 1 a.m.

Although there is no official theme for Farmer’s Day, COVID-19 has its stamp all over it.