Kimball Golfers Off To Promising Start 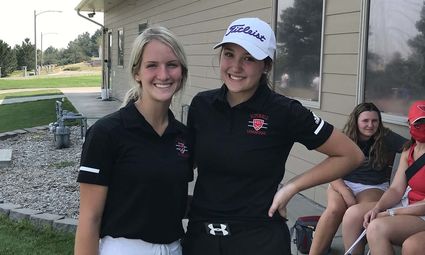 Top 10 medal winners for the Kimball High girls at the Bayard Golf Tournament this past Thursday were Katie Heeg, left, finishing 6th with her round of 51-54=105, and Payton Wise, the 1st place medalist on the day with a gold medal round of 41-44=85.

The Kimball High girls golf team is off to a promising start after placing 3rd at the Sidney Tournament and 2nd at the Bayard tournament!

The Lady Longhorns opened the season at Sidney competing with several of the large school including Scottsbluff, who won the team title with 328 strokes and placed all of their girls in the top 10 metal group. Alliance was runnerup with 404 and Kimball shot a very good scorer of 412 for 3rd place edging out Gering with 414 and Chadron with 416. Ogallala was down the line with 484 and McCook shot 498.

Emily Krzyzanowski had the low round of 74 with team mate Anna Kelley runnerup with 76. Madie Schlaepfer was 3rd with a 79. Highlight for Kimball was Payton Wise finishing 4th in the top 10 metal group with her round of 87. Maddie Cook shot 104, Katie Heeg 122, and Brooklyn Golding 112 in her first competition ever.

Coach Katie Culek said, "I was very pleased with the performance of our girls in their first tournament of the season. It was very hot and that course is long and hilly, but the girls did a good job of meeting the challenge and competing so strong with the larger schools."

With just one day's rest, the Lady Longhorns were back at it at the Bayard Tournament and despite an unfortunate injury to one of their players, finished 2nd in the team standings with their round of 455 with Chadron taking top team honors with 439. Mitchell was 3rd with 468.

Maddie Cook was Kimball's player who was hit by a stray golf ball off another player's shot, and although it hit her in the leg, Maddie was not able to finish her round and was scheduled to have a doctor look at it this past Monday. Coach Culek was hoping Maddie would be able to play in the Kimball Invite this past Tuesday, and be ready to play today (Thursday) in the Creek Valley Tournament at Chappell.

Once again coach Culek was pleased with the play of her girls, especially with two of her girls bringing home top ten medals and with Golding just one stroke out of the top ten. After the Creek Valley Tournament, Kimball will battle for top honors in the Western Trails Conference tournament being hosted by Mitchell on September 10th.