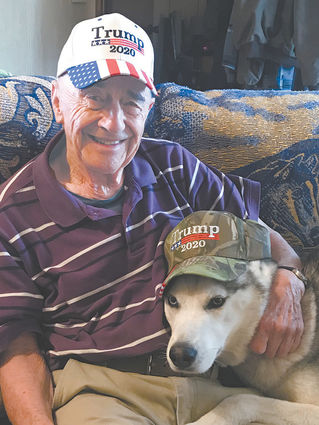 Joseph S. Hernandez, 89, of Kimball, died at Kimball Health Services on Tuesday, August 4, 2020. Funeral services for Joe were held at 10:00 a.m. on Monday, August 10, 2020, at St. John's Lutheran Church in Kimball with Pastor Kenneth Mars officiating. Burial was in the Kimball Cemetery. Friends called at the funeral home on Sunday from 1:00 until 6:00 p.m. Friends may also visit http://www.cantrellfh.com to view the obituary and leave messages and stories for the family. Memorials have been established in Joe's memory to St. John's Lutheran Church or the Kimball Volunteer Fire Department. The services for Joe have been entrusted to the Cantrell Funeral Home.

Joseph Sacramento Hernandez was born in Potter, Nebraska on April 29, 1931, the son of Cesareo and Petra (Hurtado) Hernandez. Joe moved to Kimball with his family at an early age and received his early education in Kimball. His family moved to Logan County, Colorado. During his senior year, Joe missed about a month of school because of the blizzard of '49. When he returned, he was able to complete all of the work he missed and graduated on time with the rest of his class.

He was drafted into the U.S. Army on March 6, 1952 and honorably served his country during the Korean War. He was discharged on December 6, 1953. He moved back to Kimball following his discharge from the Army and started Kimball Plumbing and Heating with a long-time friend. He attended plumbing and heating school in Omaha.

Joe met the love of his life, Nellie, who was the manager of Ben Franklin in Scottsbluff. They were married on August 11, 1955, in Torrington, Wyoming. He worked for the railroad for 6 months and then went to work at the Observer. He later went to work for the "Business Farmer" and worked there for a short time before opening his own print shop, "Joe's Press." His granddaughter, Kerry Cleveland, helped with the operation of the business. Joe continued running his print shop until his retirement in 1995. Joe was happy and content living in Kimball, the place he called home for so many years.