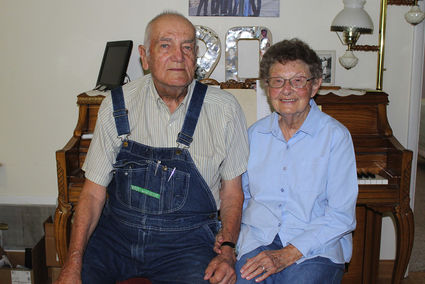 Paul and Bea Heidemann are longtime residents of Kimball County and longtime subscribers to the Western Nebraska Observer.

As the Western Nebraska Observer celebrates 135 years of existence, people like Bea have made the Observer and Kimball County what they are today.

Born Beatrice Yaege, she was raised and has lived in Kimball County for the past 97 years.

Bea Heidemann's family has roots as long as the Observer.

In 1885, the same year that the Observer started, Bea's granddad, Vance Johnson Cross, came out west to Banner County and "proved" on a tree claim, northwest of Harrisburg. He rode the train from Iowa here, and the Observer office was next to the Wheat Growers Hotel, right across the road from the railroad tracks.

Bea said that after she looks at the front page of the Observer, she goes to the Years Ago page.

"I love to look at all the old-time stuff," she said.

"When I was younger" Bea said, "Mom tried to get me to look at the family tree, but as a young thing, I wasn't interested. I wish I had paid attention."

Bea's granddad, Vance Cross, returned to Iowa only to bring his family back out to Banner County the following year. The family included two girls and two boys. In addition to the tree claim, he homesteaded southwest of Harrisburg; Lover's Leap was on his homestead claim.

"Yes, all the Crosses are distant cousins," she said.

Dolly Cross came to Kimball and worked night shift at the telephone company, while Otto Yaege, Bea's dad, came from Kansas. They were married just six months after Otto came to Kimball.

Describing herself, Bea announced, "I am a brat." She was the only child of Dolly and Otto Yaege. Dolly was 40 and Otto was 42. They had been married for 14 years when they got an unexpected shock ... Bea.

Bea attended school in Kimball and graduated in 1941. Most all the boys in her class of 43 students headed off to war. Bea remembers going through rationing, bond drives and shortages, and of course now she is living through a pandemic.

After graduation from high school, Bea worked for LeRoy R. Eastman in the insurance and real estate business as well as doing abstracts and titles. Bea said they had no money for her to go to college but she learned more in her jobs then she could have ever learned in college.

After a year and a half of working for Eastman, a relative of Eastman's came to town and took her job and so Bea was out of a job. But Eastman found two opportunities for Bea, one at the American National Bank and the other at the law firm of S.E. Torgeson and Halcomb.

According to Bea, Eastman told the bank that she probably wouldn't work out because "her math wasn't very good." Her career at the law firm was probably a better fit because she worked there just a few months shy of 50 years. Ironically, the law firm did taxes, almost 200 returns in a year.

"So my math improved," Bea stated.

The law firm had many name changes, but S.E. Torgeson was the first and Bea said, "He scared

the daylights out of me." He was older and all business. His voice was always like he was in a

Bea and her first husband, David Wilkinson, were married for 60 years. Dave died in 2012. A little over five years ago, Bea "took on another job" – when she and Paul Heidemann married.

With honesty and sincerity, Bea said, "I wouldn't trade Kimball and Kimball County for all the places in the world. Kimball County has given me everything I ever wanted in life. The people, the land, everything about this area is the best. The people are so gracious and friendly."

Bea has a wealth of knowledge about her life long home, Kimball.