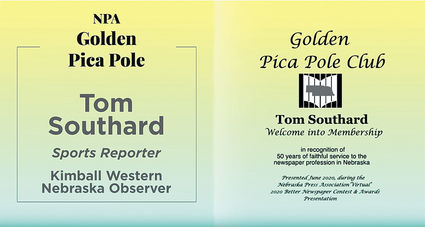 The Nebraska Press Association last week welcomed Observer sportswriter Tom Southard into the prestigious Golden Pica Pole Club for those who devote 50 years or more "of faithful service to the newspaper profession in Nebraska."

Here is the nomination column I wrote for Tom Southard to be considered for induction into the Nebraska Journalism Hall of Fame's Class of 2020, which will be named later this year. During the process, I became aware of the Golden Pica Pole Club award, which Tom received last week, and nominated him for that as well. Congratulations, Tom!

Even if I didn't know Tom Southard, I would consider him a "slam dunk" selection for enshrinement in the Nebraska Journalism Hall of Fame.

But I am privileged to know Tom, and I am nominating him for this prestigious honor.

I believe that "slam dunk" – the term for a sure thing that comes from the game of basketball – is an appropriate way to describe Tom's hall of fame credentials.

Tom, 84, has written about basketball and all the other high school sports for the Western Nebraska Observer in Kimball since the fall of 1964. He's still at it in the year 2020 – covering Kimball High School Longhorns teams, writing his weekly "Jock Talk" column, and sprinkling in enterprise stories that go beyond the playing fields and courts.

Tom, who lived his first 10 years in a Kimball County farmhouse without electricity, running water or indoor toilets, is a self-made institution at the Observer and on the local sports scene.

"I tried to retire two or three times," he said, "but that didn't seem to work."

When searches to find his would-be sportswriting successors haven't panned out, Tom responded to the call of duty. He returned to report about the community's young athletes for the Observer. He was back. Back in print.

Tom has never been a full-time Observer employee, but the number of his bylines in the paper, week in and week out over the decades, suggests otherwise.

His sportswriting began after he served in the Navy and returned home. A sports fan and an athlete, he saw a need for better coverage of Kimball High teams in the Observer. He made his case to management to be the one providing it.

As always, Tom still types his stories on a typewriter and hand delivers them to the Observer's downtown office for publication. If he's busy writing multiple stories on deadline, it's his wife, Karen, who brings in his work while he's home typing up the next article.

"I've always done exactly what I'm doing, as far as the newspaper goes," he said. "I have a great love for athletics, and I like kids, too. I love high school sports more than any other sports."

So, thoughTom says the years are catching up to him, he keeps writing for the hometown paper long after he stopped managing radio station KIMB-AM and selling Fords for a local dealership.

The old Chadron State football player, as some might say, "still has it." He also shot 82 on the local golf course last year – at the age of 83.

In Kimball, Tom long ago earned his "hall of fame" reputation. As a sportswriter with the Western Nebraska Observer, he deserves to have it made official.

Please consider Tom Southard for the Nebraska Journalism Hall of Fame Class of 2020.