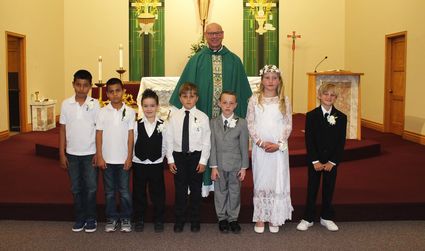 St. Joseph's Catholic Church was able to finally celebrate First Communion during the pandemic. First Communion is usually held in May, but with the Governor's Directed Health Measures it was put on hold until June 27. Receiving First Communion were, from left, Angel Gomez, Juan Gomez, Troy Sharples, Benjamin Anderson, Kylun Hinton, Ava Anderson and Trajan Johnson. Father Mike McDermott is in back.

Kimball County is currently faring better than other area counties with COVID-19 cases, and this is good for the health of residents and the economy.

One positive case was identified in Kimball County last week, a woman in her 50s, and a man in his 60s was confirmed to have the virus June 30, but other counties in the Panhandle Public Health District have seen a rapid increase in their positive cases. Morrill County has had a total of 36 cases, and 22 of those cases are still active. Scotts Bluff County has 76 active cases.

To the west, Laramie County, Wyoming, health officials were concerned because last week 15 cases arose after a downtown evening event, and most of the new cases were people in their 20s and 30s. They now have 19 active cases. Wyoming has extended the public health orders until July 15.

According to the City of Cheyenne site dated June 26, "Earlier this week, five restaurants were identified with COVID-19 positive staff."

Kathy Emmons, Cheyenne Laramie County Health Department director, stated that "the goal was not to imply that these establishments weren't doing a good job. The goal was to alert the public that they may have been exposed and to watch for potential symptoms. Our hope is that by increasing compliance in all Laramie County establishments we can limit exposure and reduce the spread."

South of Kimball County, the Northeast Colorado Health Department said in a telephone interview that their cases were "going down."

Logan County has had 637 cases, but there is an ongoing investigation and disclaimer due to the Sterling Correctional Facility. The community of Sterling only had 70 cases.

Morgan County has no disclaimer attached to the figures, but the official said they have had 652 cases. They were unable to determine how many actives cases there are in Morgan County now.

Northeast Colorado Health Department said those areas are under health orders and there is a tight hold on large gatherings. Restaurants are still at 50% capacity.

So, Kimball County, keep washing those hands, practice social distancing and mask-up when around groups of people to stay safe and healthy.