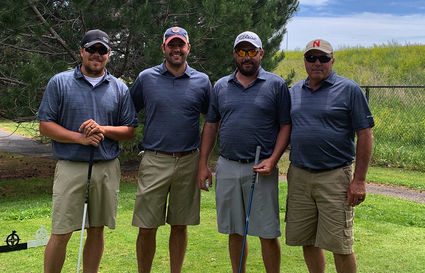 Jacelyn Brown / For The Observer

The winning team of Taylor Brown, Preston Brown and Mitch Brown are joined by father Jerry Brown following their championship performance in the 2020 Father's Day 3-person golf scramble. The Brown brothers shot 61-55-116 to win the overall title by 3 strokes over the defending Greenwood team.

The three-man team of Mitch-Preston-Taylor Brown captured the championship of the 2020 Father's Day Golf Classic winning by 3 strokes over the defending team of Kenny-Jeff-Jordon Greenwood.

Another family team of father Chad Wise and his son Dillon and daughter Payton finished 3rd at 60-62=122. The Championship flight was composed of nine 3-man scramble teams.

A total of 35 teams made up the field this year at the Four Winds Golf Course after one of the 36 teams signed up failed to show, and despite a waiting list of additional teams, it was too late to call in one of the out of town teams listed.

The 1st flight was also made up of 9 teams and the winning team was Vickie Brown, Aaron Brown, Ralph William shooting a winning score of 63-63=126. In 2nd place was the team of Andrew Brown, Aaron Osborn, and Terry Osborn shooting 65-63=128, and third place went to Kevin Thomas, Gary Haack, Ty Laws with 67-61=128.

In addition to the top 3 teams prize money, daily flag prizes and skins, along with day money were paid out. The tournament was one to remember with the great turnout and with everything going off smoothly.

Tournament chairman Randy Bohac said, "It was a great weekend with great weather. The course was in great condition. There were great friends and family all around, and some great fun filled golf."

Randy went on to give a big thank you to all who played and offered up a "shout out" to Jeremy Williams and his staff for getting the course in excellent condition, and to Chad Wise and his staff in the Pro Shop were keeping things running smoothly throughout the entire weekend.

An observation I made was that the name Brown was the most popular this year, as noted in the teams mentioned in the winning lists, but along with several others. The Hobart Brown family out of Texas brought in 6 players, and this special family plays this tournament every year.

I also want to thank Randy Bohac for all of his help in making sure I had all the information I was looking for. The 2020 Father's Day 3-person Scramble is in the books and we already look forward to next year.