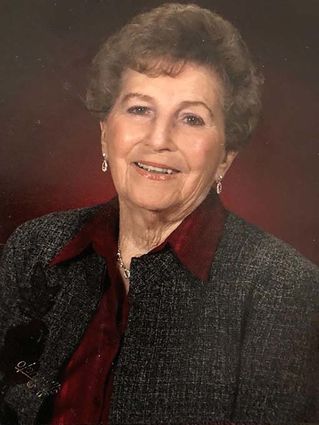 Much loved by her family and friends, JoAnn Hyatt Hessler Reader passed away at Emerald Court in Scottsbluff on June 18, 2020. She was born April 17, 1924, in Marion, Kansas, to Howard and Edith (Woodhead) Hyatt. She grew up on a farm in Lyman, Nebraska, with her parents and six siblings. JoAnn was an excellent student, very active in sports, and graduated from Lyman High School.

JoAnn received a telegram from Navy sailor Alex Hessler, Jr., asking her to meet him in New York City while he was on leave during World War II, because he found he couldn't live without her. They were married in New York City and JoAnn worked in the big city until the war ended. She and Al moved to Hay Springs, Nebraska, to farm on Mirage Flats. She and Al raised four children and became very active in the community. In 1969 the family moved to Scottsbluff where JoAnn worked in insurance.

After Al's death, JoAnn joined square dancing groups and met David Reader. She and Dave were married in 1994 and moved to Kimball. They had exciting times together as they enjoyed dancing, playing cards, and their many friends. They especially enjoyed traveling all over the world as well as camping. JoAnn so enjoyed entertaining her family and many friends. Every holiday you would find her family gathered enjoying her loving hospitality. JoAnn never met a stranger and was always generous, kind, and fun.

She was preceded in death by her husband, Al Hessler, children Jack and twin daughters, brothers Ed and John, sisters Wilma, Georgia, Marie, and MaryLou (Teeny), and grandson Chad.

Her funeral service was held at 10 AM on Wednesday, June 24, 2020 at Trinity United Methodist Church in Kimball with Reverend Roger Gillming officiating. Interment was held at 2 PM at Fairview Cemetery in Scottsbluff. Visitation was from 3 to 7 PM on Tuesday, June 23, 2020 at Gering Memorial Chapel. In lieu of flowers memorials may be given to the Church or to Oregon Trail Dance Club. Online condolences may be left at http://www.geringchapel.com