Blaze Destroyed Everything At Barn In 4th & Nadine Neighborhood 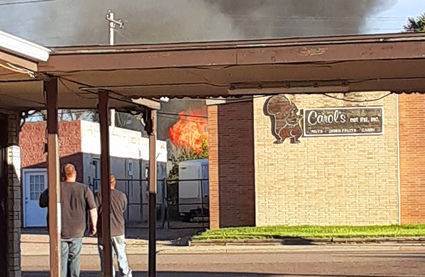 Flames and smoke from the fire in the alley between Nadine and Washington streets could be seen for quite a distance.

Days after a blaze in Kimball, the smell of smoke still permeated the neighborhood of 4th and Nadine as a result of a barn fire on Wednesday evening.

Charles Maughan's barn/shed, along the alley between Nadine and Washington, caught fire. The fire not only destroyed everything in the barn. including two vehicles, but also burned up the electric pole and left neighbors without electricity for a short amount of time.

"The investigator said it might have been wiring," Maughan said.

Maughan, a truck driver for Crete out of Lincoln, drives from the Cheyenne Walmart Distribution Center to the Front Range. He said he purchased the house in May of 2017.

Maughan said he has insurance on the barn but the vehicles just had liability coverage.

"The shed is covered but not the vehicles," he said

He happened to be in Longmont when the fire occurred, and his neighbor called him.

Maughan was appreciative of the city electric department.

"They put a new box in and hooked it up last night (Thursday night) for me and my neighbor, and I think a neighbor who is catty corner," he said. "We are all on that same box. So we all got power.

"They were out here all day yesterday, the night of the fire," he continued. "They were getting power to anyone that they could get power to. These guys have been miraculous, getting stuff hooked up and going."

"The H-frame, holds meter boxes," he explained. "We are hoping to get this new H-frame up and get power on. We are trying to get it done fast to get electricity back to those people."