Griebel's Recount Victory In The Cards

10 Of Diamonds Breaks Tie, Puts Her In General Election 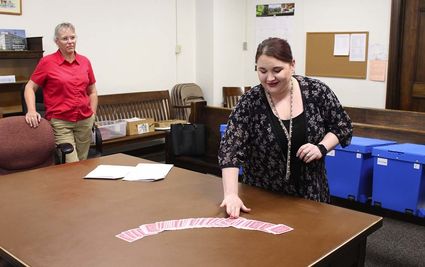 Total votes remained the same after the recount, so the tie for sixth place on the school board ballot was broken by drawing the high card. Candidate Maggie Laughlin, right, draws her card. Deb Evertson, left, drew the winning card as the representative of candidate Jennifer Griebel.

Six candidates from the school board election were slated in the May 12 primary to move on to the general election, but sixth place encountered a tie vote between Maggie Laughlin and Jennifer Griebel, so hence a recount.

Even after the recount, the two remained deadlocked in votes – which required that a tiebreaker be conducted. In this case, the candidate or her representative who drew the high card from a deck of cards would win. It turned out to be Griebel with a 10 of diamonds.

The recount was scheduled for May 28 at 1 p.m. Both, sixth place candidates were notified by certified mail of the upcoming recount.

The three members of the canvassing board or election board, representing both political parties, who conducted the recount were Jodi Keeler, Carol Walker and Assunta Nelson. Canvassing board members hold the position for a two year term and can be reappointed.

It took just over three and a half hours to recount all the ballots from the May 12 primary election. Using two voting machines, the three individuals recounted all the early voting ballots and the ballots from Bushnell, Dix, 1st Ward, 2nd Ward and Antelope precincts.

After the recount was completed and the votes tallied, both candidates had exactly the same number of votes – 264 each.

Maggie Laughlin and a representative for Jennifer Griebel broke the tie by drawing cards, and the high card won. Laughlin went first and drew the 6 of hearts, then Griebel's representative, Deb Evertson, drew a 10 of diamonds. So Griebel will move onto the general election.

Griebel wanted to thank everyone for the support and she said, "I look forward to the opportunity to advance as a candidate for the Kimball school board."