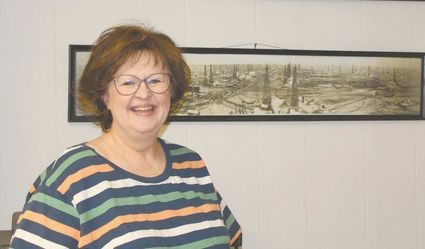 Liz Ferguson, owner of Eatmon Well Service, stands in front of office pictures of the oilfields of Oklahoma and her grandfather. Her grandfather came to Kimball in 1956 and started Eatmon Drilling Co.

"We used to run 24 hours a day with two divisions and up to 12 rigs." said Liz Ferguson, owner of Eatmon Well Service, as she reflected on the golden days in the oilfield.

The oil industry has always had its ups and downs. Liz said, "It is either up or down. If it was only an even road. When it's good, it's good, when it bad it's really bad!"

According to Liz, in 1982, they were really busy, the oil industry was booming.

And just like that, they were a million dollars in debt.

This last downturn in the oil indu...