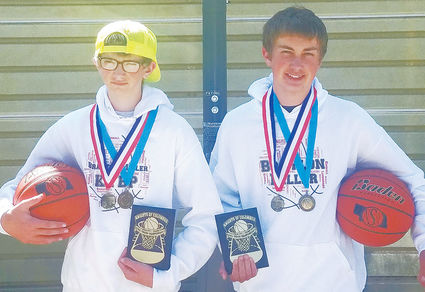 Braylon Miller and Braxton Miller, sons of Mr and Mrs. Chad Miller, were both recent state qualifiers in the Knights of Columbus free throw shooting contest.

The Kimball brothers shot in their local competition at Sidney.

Braylon, an 8th greater this past school year, competed in the 13 year old division and had his best outing in the Districts in the Scottsbluff, where he made 19 of 25 for 76%.

Regionals were held again in Scottsbluff and both boys advanced to the State...