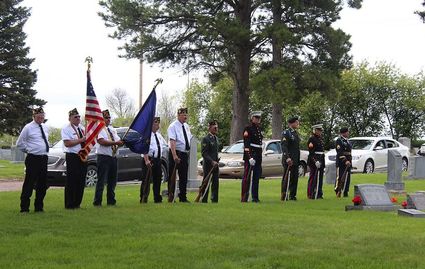 Although Memorial Day is traditionally considered to be the beginning of the summer season with people off to the lake and enjoying barbecues, it's real meaning can be found at the national and local cemeteries.

Memorial Day, formerly known as Decoration Day, commemorates all men and women who have died in military service for the United States.

Although unofficial, Kimball's COVID-19 Memorial Day 2020 will be a very quick and simple ceremony.

The local VFW will have an honor guard, folding of the flag, a prayer and a 21-gun salute. Anyone attending is asked to stay in your vehicle at the cemetery. There will be no free rides by the Kimball County Transit and no hamburger feed at the local VFW Post.

Americans celebrated Decoration Day after the Cvil War ended in 1865 when the first national cemeteries were established. But it wasn't until 1971 that Memorial Day became an official federal holiday, celebrated on the last Monday in May. It will be observed on May 25 of this year.

On Memorial Day at 3 p.m. local time, a national moment of remembrance takes place throughout the country.