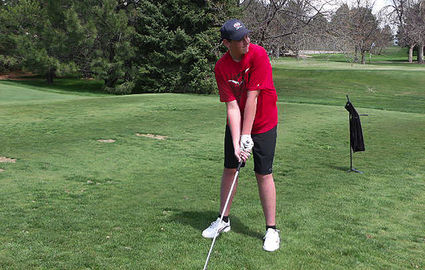 Jess Heidi-Sieren didn't get to play his junior season of Kimball High golf thanks to the cancellation of all Nebraska spring sports because of COVID-19, but it doesn't keep him from working on his golf game. I caught him on the range at the Four Winds recently as he warmed up for a round of golf with his former teammate of last season, Dillon Wise. Jess was a varsity player for Kimball last year as a sophomore, and is bigger and stronger and was looking to be an even better golfer this season. Watch out next year!

I have received what I feel is uplifting news from the good people who head up the local golf leagues, and it looks like there will be league play, and possibly even tournaments this summer at the Four Winds Golf Course.

Randy Bohac informs me that the Thursday Night Men's Golf League will take place. The league is set with 28 teams playing a 9-week schedule with a season ending tournament. Schedules and rules are to be mailed out this week.

Also, the annual Father's Day Classic Golf Tournament is still on for the Father's Day weekend in June, with the usual format of a 3-man scramble played over a TWO-day weekend.

Randy said, "We wanted to keep it on the schedule and then if for some reason the state says no, we can always cancel later."

Pat O'Brien, who heads up the Four Winds Men's Monday-Tuesday golf league, said their league play is ready to go also. There are some changes this season to go along with the coronavirus stipulations.

Golfers can set up their own league play-day and tee time, but must get it set with Four Winds pro Chad Wise. There will be no preseason tournament play, and no Fun Night tournaments unless things do open up later.

Also, anyone not involved with League play who would like a GHIN handicap can contact Pat at 235-5009 and he can get you fixed up.

I have not heard direct from any of the women league officials, but I have heard that both of the Kimball women's leagues will also play again this season, so it looks like golf in Kimball is going to happen.

There is a lot of space out at the Four Winds with lots of fresh air and green grass. The good folks at the pro shop are doing what they need to do to stay safe, and all golfers need to do likewise. Have fun!

I have also heard that the state officials are giving the go-ahead for baseball and softball for the kids this summer with some rather strict conditions to keep the kids safe. I do believe Kimball is also planning on a program as they are asking kids to get signed up.

Sorry about the goofy spelling of Bohac in last week's column. Trust me, I know how to spell Bohac. It came out as "Bohatch" due to a computer "autocorrect" mistake as the column was being prepared for print.