Beau Hanks To Play In College; Jessica Hanks To Coach In Sidney 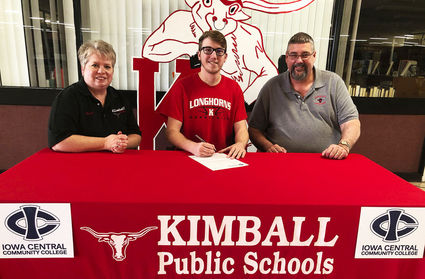 Beau Hanks is flanked by his mother Kristi and father Eugene as he signs his letter of intent to play basketball for the Iowa Central Community College in Fort Dodge, Iowa. The 6-5 Kimball High senior led the region in blocked shots this past season while setting a new school record.

Beau Hanks has accepted a scholarship offer from Iowa Central Community College, located in Fort Dodge, Iowa, to continue playing basketball while working towards a college degree in business administration.

The 6'5" Kimball High senior will follow in the footsteps of his father Eugene "Mo" Hanks, who played football at Iowa Central some 40 years ago, and Beau said this was part of the reason he chose to start his career in the same location his dad did.

"I really liked the coach and the way he presented himself, and my dad really liked his time there and spoke highly of the school," Beau said. "The coach seemed to genuinely care about me as a person, not just as a player, and I'm anxious to join the program and the school."

Beau played his senior year at Kimball High under the direction of his father as Mo Hanks coached the Kimball boys this past season.

Of note, Mo is leaving Kimball in about a month to start his new duties as superintendent of the Crawford Public Schools.

After his two years at Iowa Central, Mo finished up his final two years of football at Chadron State, and along with earning two letters playing football at CSC, he also won two more letters for indoor track and two for outdoor track!

Jessica Hanks is also on my reporting list this week.

The young lady, who played her sports for Kimball High and graduated with many honors, recently graduated from Chadron State College with honors once again, majoring in grades 7-12 English.

She has accepted a position at Sidney High to teach ninth-grade English, and she will also assist in coaching girls basketball. Along with her degree in English, Jessica also has endorsements to coach volleyball, basketball, and track and field.

"I am excited to start my career in teaching and coaching at Sidney," she said.. "I also thought it would be nice to be close to my parents again, but now they are moving farther away with their move to Crawford."

I personally hate to see any and all of the Hanks family members move away from Kimball, as I know lots of people do, but I wish them all the best and we will keep in touch.