While I Have My Record Sheets Out ... 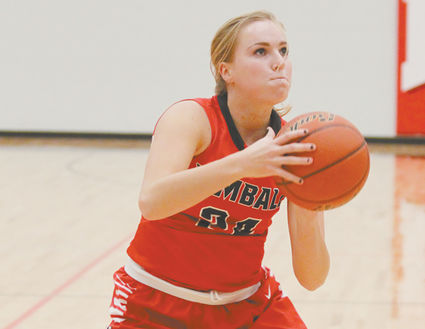 Danika Daum, shown here in December 2015, scored 1,240 points in her Kimball basketball career – good for second in Lady Longhorns history. Who's first? Who's third? The answers are in this week's Jock Talk.

The only local and area sporting activities that are taking place, as far as I know of at least, is open golf at the Four Winds Golf Course.

By direction of Nebraska State officials, there will be no organized golf, which includes league play and tournaments, until at least June 1, and at that time it could be given the OK, or maybe not.

It could be worse as Colorado has closed all their golf courses to any kind of play.

I was looking back to see what our Kimball High athletes have missed out on so far this spring season. The Kimball Invitational Track meet was scheduled for March 28. The Bayard C-D meet would have been April 4, and the Creek Valley meet was set for April 6. This Saturday, April 18, was to be the Western Trails Conference meet at Mitchell.

The Boys Golf season was to open April 14 at Mitchell, and the Bridgeport Tournament was to be held April 16. Of course, there is the junior high track also, and lots other fun things our kids, and their fans, are missing out on.

My good friend Con Marshall, who writes for the Chadron paper, called me this past week to inform me that he is putting together a Panhandle girls stat sheet and was kind enough to send me a copy of what we had already compiled.

He was also trying to update some career stats for the Panhandle girls and was wondering if any Kimball girls had scored 1,000 or more points in their careers at Kimball High.

While I have my record sheets out, I thought I might share it with you readers as well. Kayli Rageth, a 2010 Kimball High grad, holds the Kimball career scoring record with 1,386 points, and also has the top two season records of 498 scored her senior season of 2009-10, and also 436 for second high her junior year. Her sophomore season of 2007-08 ranks 12th with 298 points.

Kimball has three ladies who scored over 1,000 points in their careers. The others are Danika Daum scoring 1,240 points and Melissa Christensen scoring 1,038.

Of note: Mike Daum wasn't the only Daum who could shoot the basketball in the family, and we haven't even gotten to what Mom Michele accomplished in her spectacular high school/college career, and Dad Mitch did a great job for Kimball High himself!

With not much of anything to write about that is happening this spring thanks to the Covid-19 shutdown, Observer Publisher Jim Orr suggested maybe I could go back in time and give you readers something to enjoy. The national papers and even TV are doing this as well.

I will search my files and try to give you something to enjoy each week until things open up again.