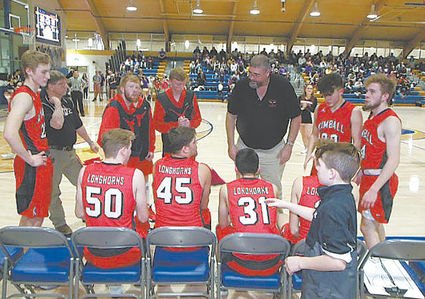 Kimball Coach Mo Hanks gives instructions to his team during the final minutes of play at the subdistrict finals in Gering this past Thursday. Bridgeport won out, 45-43, in overtime.

The Kimball High boys saw their basketball season come to an end in an exciting, and well played, subdistrict championship overtime loss to Bridgeport.

The fans were treated to high school basketball like they come out to see it, and if you were a neutral fan the outcome was OK. The Bridgeport fans were quite pleased and the Kimball fans disappointed to see their team lose after giving such a great effort.

The Bulldogs from Bridgeport prevailed, 45-43, and for the season, won two of the three meetings between the teams.

With the loss, Kimball closed out the season with 11 wins and 12 lo...