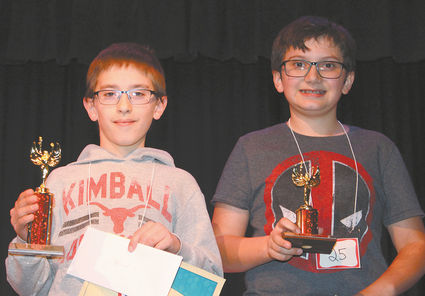 Fifth-grader Trey Cook out-spelled all of his competition on Monday afternoon at the Kimball Spelling Contest.

Trey now has the opportunity to complete in the Midwest Spelling Bee in Omaha on March 28.

Apparently, Trey could smell the sweetness of success when he spelled "perfume" correctly to win the contest.

Real sportsmanship was displayed when Trey received a high five and a fist bump from Landon after the event.

Contestants for the Kimball Spelling Contest were selected from a written test given in the classroom. Twenty-four students from the fourth through eighth grades choose to participate in the yearly contest. Each student received a medal and a certificate for their spelling abilities.