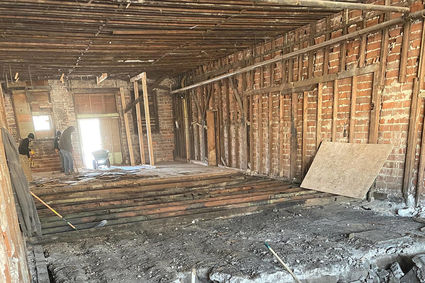 The Longhorn Building renovation is beginning to take shape as workers of Shane Hayes have completed cleanup and are preparing the interior walls.

The "old Longhorn" building on the northeast end of Chestnut Street in Kimball is getting a total, top to bottom makeover – in its basement and first and second floors.

Shane Hayes, who recently purchased the historic building from the city, is making his mark on Kimball's business scene. The renovation of this building is exciting news for Kimball and a progressive project for Hayes.

He described the property as a "construction site" and said it is "looking like a total mess now." But he said it is already an improvement and will improve that area.

The building will have "a totally new look with parking in the back," he said. When completed, it will be stoned and stuccoed. In all, he said it will be a $500,000 project.

When completed, Hayes' wife Haley will be opening a boutique in the main level of the building right next to Larsen's Jewelry Store. Her intention is to open it sometime next year.

Hayes has had a crew of about 10 working on the site at any given time, but he still figures they are about two weeks behind mainly due to weather related issues.

The intention is to have two of the three main levels open in May or June. There will be four to six apartments, two bedrooms, two bathrooms and some variations.

The three part building has had a new roof and all new sub-flooring. Just an indication of the work involved – 10 layers of flooring had to be removed from the first level of the building. The progress to date has the building being utted with preparations made for the complete remodeling.