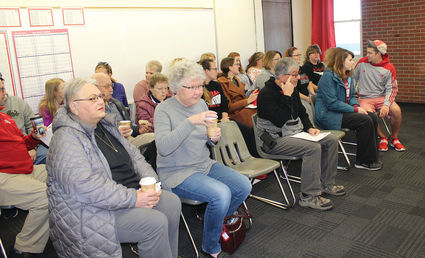 The crowd stayed consistent throughout the long day of interviewing superintendent candidates. About 30-40 people listened to the school board interview the three candidates. The interviewing process started at 8 a.m. Saturday and went into late afternoon.

The School Board was back in session on Monday evening, Feb. 17, after a long day Saturday of interviewing candidates for superintendent of schools.

The first action item: Discuss, consider and take all necessary action with regard to approval of Trevor Anderson to be superintendent of the 2020-21 and 2021-22 school years. Anderson received the nod of the school board for the position of superintendent with a 6-0 vote.

Anderson, who will replace Elizabeth Owens in Kimball, is high school principal at Chambers. He previously taught high school science and has been employed at Battle Creek schools and Southern Valley schools.

Anderson provided a statement for the Observer.

"I am excited for the opportunity to lead Kimball Public Schools as the next superintendent," he said. "From what I have gathered, Kimball Public Schools has a great staff in place, students that are courteous and respectful, and the district is strongly supported by the community. My family and I look forward to being a part of the Kimball School District and community, as there are many positives to The board planned to meet again Wednesday to approve the contract for Superintendent-elect Anderson.

Meanwhile, a search carries on to find the successor to high school principal Mo Hanks, who will leave following the school year to become Crawford superintendent. The sudden hospitalization of school district business manager Harold Farrar this past week also has the school district facing a challenge in another top position.

The school board meeting continued with the fifth and sixth grade PBiS (Positive Behavior interventions and Support) Student Leadership team presenting their philosophy, which includes being good examples and wanting to be a bigger part of the school. They plan on doing some projects, which consist of a charity project and welcoming new students. Their sponsor is Mrs. Murdoch.

February Jr/Sr High School Principal's Report stated that spring break will be from Wednesday, March 4, to Sunday, March 8. District FFA competition will be March 4 and the Kimball staff will have two Professional Development days on both, March 5 and 6.

According to Principal Hanks, district wrestling was held and there are four state qualifiers and Wednesday they will have a tunnel walk for those individuals. State Cheer and Dance is Saturday, Feb. 22 and sub-districts basketball will be the next two weeks.

Mary Lynch principal's report began with the February theme of being kind to one another. Mrs. Soper continued with reporting that all of her staff walk-throughs are completed. Edgenuity has been added to third through sixth grade for math interventions and Mary Lynch students will be taking the NSCAS from April 15 through the 21.

A lengthy report was presented by Gregg Fossand, director of transportation and maintenance. He described the various projects that have been completed on the buildings and grounds. While a lot of projects have been completed, many still remain or are in progress.

Travis Terrill summarized the Kimball Public School District Networking Equipment proposal. The current network switch hardware is six years old and at the end of its life. The majority of the cost of new hardware would be absorbed by the E-Rate program. The board approved spending not over $14,000 to upgrade the system.

Finally, the school calendar, was presented but no action was taken as it will be formally presented in March. The proposed calendar has 179 school days with Wednesday early release days for teacher development.