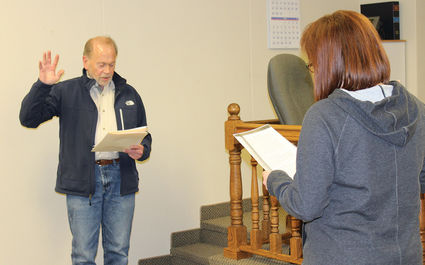 Kimball City Council is back at full strength.

In order to make the council complete, Mayor Keith Prunty's appointment of Creg Pike to fill the vacancy on the council was accepted Tuesday by a motion and a second. The measure passed, 3-0, to have Pike fill the seat that opened when Christy Warner stepped down.

Pike then took the oath of office and climbed on board to join the council.

Mary Lynch student, Lane Cook led the Kimball City Council in the Pledge of Allegiance for the Feb. 18 meeting.

The first order of business for the city council was the One and Six Year Plan for the streets....