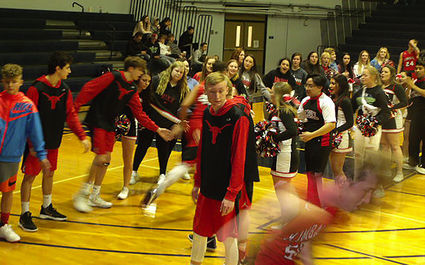 Kimball had lots of fans at the WTC tournament semifinals Friday at WNCC Cougar Palace. They streamed on the court for the introduction of the starting five.

The Kimball boys finished 4th in this year's Western Trails Conference Basketball Tournament play, losing 37-34 to Morrill in the consolation finals on Saturday.

The Longhorns got off to a good start with a 47-30 win on the road over Gordon-Rushville in first round play, which advanced them into semifinal play at WNCC Cougar palace, and gave them two more contests as first round losers were out.

In semifinal action, Kimball lost to the eventual champion Bridgeport, 61-40. In winning the championship, the Bulldogs defended the title they won a year ago and defeated the No. 1 seed Mitchell...