Kimball's Dale Hendrickson Gets In The Nebraska Baseball Hall Of Fame 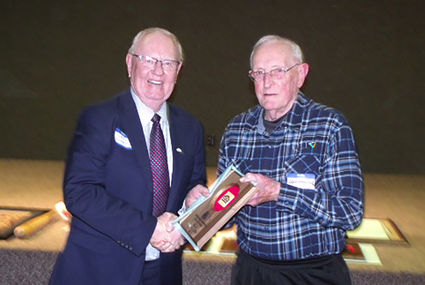 As of February 9, 2020, Kimball's Dale Hendrickson is a member of the Nebraska Baseball Hall of Fame! And he has a lot of his Kimball friends and fans that can testify to this happening as they journeyed from near and far to witness, and be part of the ceremony.

This year's induction of the 7 new members consisting of 5 players, a media person and a coach, was held at the Nebraska Baseball Hall of Fame headquarters located in Beatrice, Nebraska, this past Sunday evening complete with an invitation to everyone to tour the Hall and look at all the members who have been honored throughout the years with pictures and info on everyone. There was a social time when everyone who came could not only converse with the inductees, but also with other members of the families and with a lot of other friends who came from all parts of the country to be part of the induction of this years honored members.

I think I can safely say that Dale had as many, if not more, people in attendance to see him honored than anyone. With limited space for about 300 people, each inductee was allowed 30 friends or guests, but Dale filled his tables and even more space was awarded to his additional fans and friends. I know at one side table next to his appointed table was four former good guys who played for him as members of his Kimball Legion team including Donny Buddecke, Jon Petsch, Mark Spargo and Tom Feemster. Scott Sterling and his wife Sue were sitting at the table where my wife Karen and I sat and Sue did a video of Dale's acceptance speech, which was enjoyed by many who were not able to make the trip. Scott was also a former player for Coach Dale and now lives in Hastings. Bill Hinton and his wife were there and Bill was a former player also. It was so special to see all of the good folks who made the trip from all over to be there. Dale, and his family, were appreciative!

Dale's baseball career goes way back to his youth and he was making headlines in his early teens when he pitched the Gering Legion team to state championship. He signed a professional contract with the Braves as a 17 year old kid after they viewed him throw a few pitches at a camp held in Rushville and it took all of about 20 pitches before the left hander was offered a contract of $200 a month and a $500 signing bonus, and a non-air-conditioned bus ticket to Lawton, Oklahoma. It was a one page, sign, press hard, three copies and we're outta here deal.

Bornschlegl went on to tell about Dandy Dale, as he was known in the Oklahoma State League pitching 49 innings without giving up a run of any kind, and 79 innings without giving up an earned run. Dale went on through the years to move up as high as Triple A and pitched on the big-league rosters in spring training as team mates of Spahn, Burdette, Aaron and Adcock to name a few.

In a spring training game against the defending World Champion Yankees in 1957 he pitched 5 innings giving up 1 run and 4 hits "before being relieved and embarrassing the Yanks any further" as Bornschlegl said. He had fanned Mantle, Berra, Skowron, Kubek, and McDougal in that span. Dale left the Braves in 1961 and then went on to a long and legendary teaching and coaching career at Morrill and then 27 years at Kimball where he coached many sports, was the Athletic Director, and has the Kimball Legion Baseball Field named after him.

Dale was also an outstanding basketball player at Chadron State College where he obtained his degree and is a member of the Chadron State College Athletic Hall of Fame. He was not allowed to play baseball for the Eagles as he had signed a professional baseball contract and was gone with the Braves during the season, but came back to school and played basketball during the pro baseball off-season.

Dale still resides in Kimball, but journeys back to Omaha where his daughter Tracy and her family lives. In his acceptance speech, which was certainly the best of the night in my opinion, he said that Tracy was his "Uber driver" and I hope I spelled that correct, but he still drives himself around the Kimball area. He got some good laughs when he said, "I am sure my eyesight will be better now that it is 2020."

A special thank you to Richard Arndt of New Mexico, who did more than anyone else to help get Dale honored as he was, and is, a great fan of the Braves and pushed hard for Dale to be inducted. Thanks also to Con Marshall of Chadron, who joined with us to get our man recognized. I hope all of you fans of Dale, and of baseball, can get to Beatrice sometime and tour the Nebraska Hall of Fame. I also hope you get the opportunity to see Dale's acceptance speech on Facebook thanks to Sue Sterling. In closing, Congrats again Mr. Dale, and now we will work on getting you into the Kimball Four Winds Golf Hall of Fame!