Kimball High Students Get A Look Inside The Courthouse 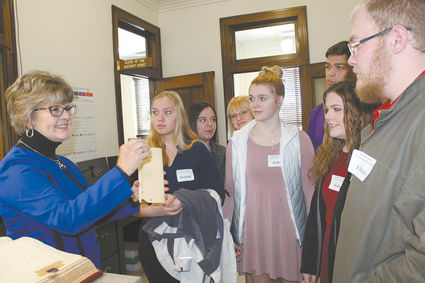 Lulf said he "found visiting the jail cell was the most interesting. I think this because the cell was so small and it was still holding nine people ... My favorite county office was county assessor. She was very intuitive and her job seemed really interesting."

Lulf and his classmates in the senior civics class took part in County Government Day on Wednesday, Feb. 5.

Senior Nicole Delaphane said the "Parole Office was was my favorite. I was impressed by how difficult the job was and the fact that the parole officers never quit. It takes a lot of mental strength to stay positive and continue trying to help someone who may not want it."

After the introductions and speakers, students visited and learned about the different offices in the Kimball County Courthouse, including sheriff, clerk of the district court, county assessor, county clerk and county treasurer.

Students spent half a day learning the ropes of county government and were treated to lunch after the experience. The day concluded with a trivia match game to reinforce the information they learned about county government.