Induction Day Near For Dale 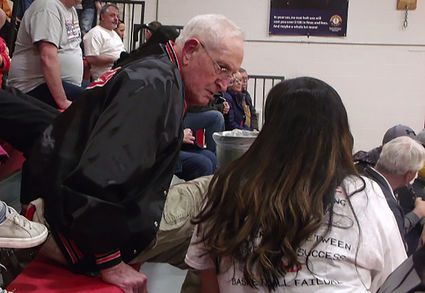 Dale Hendrickson, Kimball's Mr. Baseball, gets inducted Sunday into the Nebraska Baseball Hall of Fame. The former Kimball High administrator and coach attends a Longhorn basketball game in this photo.

Dale Hendrickson, a regular at almost all of Kimball's home basketball games, watched intently at the action at Friday night's Kimball-Sutherland contest. The man, who spent many years as a coach and administrator at Kimball High, will miss the Kimball games this weekend as he will be back east at Beatrice being inducted into the Nebraska Baseball Hall of Fame.

Dale is one of five players, along with a coach/manager and a media personality, who will be honored at this year's induction being held at the Nebraska Baseball Hall of Fame at the Country Cookin Restaurant and Event Center located in Beatrice.

Doors open at 3 p.m. Beatrice time with dinner and the presentations beginning at 5 p.m.

Dale's baseball fame began as a teenager when he pitched the Gering American Legion Team to a state championship way back in 1953 when he was 17 years of age. He signed a contract with the Milwaukee Braves the next summer and spent a few years with their minor league organizations.