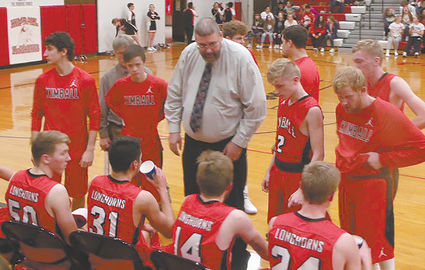 The Eugene "Mo" Hanks era as principal at Kimball Junior/Senior High School is nearing an end. Hanks, shown above coaching the Kimball Longhorns basketball team earlier this season, has agreed to become superintendent of Crawford Public Schools after finishing out the school year in Kimball. The search for his successor has begun.

The Kimball School Board accepted the resignations of two employees, junior/senior high school Principal Mo Hanks and teacher Kathleen O'Brien, during a special board meeting at noon Monday, Jan. 27, in the district office at the school.

The board accepted both resignations by 6-0 votes.

Hanks submitted his letter of resignation, which will be effective at the end of the current school year. He gained his teaching and coaching experience in Hemingford, then came to Kimball to be the principal beginning in 2007.

After 13 years as principal, Hanks will take on the role of the superintendent at Crawford Public Schools.

School board President Heather Norberg thanked Hanks for his time as principal.

Hanks said he is pleased that his youngest child, Beau, will graduate in May from Kimball, where he started as a kindergartener. Mo Hanks said by moving to Crawford, he will be only 40 miles away from his mother.

According to Superintendent Elizabeth Owens, the search for a new principal has already begun. Owens stated that "My intention is to advertise the position across the state of Nebraska on the state school board website."

She indicated that they will probably accept applications for a 30 day period, then create an interview team of five people, including administration, teachers and community representatives. The process will probably take two months.

"I am excited for Mr. Hanks," Owens said. "It is a great career move for him."

O'Brien hopes that by retiring she will be able to spend more time with her family and travel, according to Principal Hanks.

An evaluation of replacing O'Brien's position will be conducted.