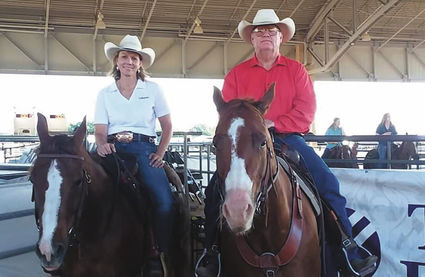 "Hey, why don't you come to this sorting event with me? I think you will get a kick out of it," Frank Stauffer asked Trish Lukassen, who has since become his ranch sorting teammate.

Although she had never watched the event, Trish didn't just show up. She took her horse and participated – and the rest is history.

The Lukassen/Stauffer team from Kimball has been ranch sorting since 2015 together.

"It took us a long time to learn to ride together right," Lukassen said. "We were so afraid we were going to screw up and let the other one down, so we would mess up."

"I've ridden my whole life and done a little bit of everything," she said. "It was just something new and something around cattle that I've always done. We both grew up that way. Something you could do and compete in, I think that is what drew me to try it."

Stauffer shared that he enjoys the "competitiveness and the friends you make. It is an amazing group of friends from all over the country."

Teams participate in divisions and are handicapped. They start with 11 cows in one pen and have an adjoining pen. The cows are numbered 0-9 and one is left unmarked.

While the first rider enters the pen of cattle, the other rider guards the opening between the two pens. The goal is to sort the cattle, one by one from the herd into the second pen. As the team starts, a number is called and they must sort the animals in less than one minute.

If one gets out of sequence or gets away from them, they have a "busted run, no time," Lukassen said. She calls it "gambling on horseback." Generally, only three runs out of 10 will be successful.

Lukassen added that "we have both been real competitive in the Wyoming association. This last year when we went to Reno, that was a big deal. There were 1,030 teams participating."

Both Stauffer and Lukassen won divisions at Reno. Forth Worth had 6,900 teams and they were pleased that they both made it back into the finals.

In addition, the Lukassen/Stauffer team won and received a gorgeous belt buckle at the first Jelmer Johnson Memorial Ranch Sort in Torrington, Wyo., last fall. This was a meaningful win for Stauffer, as Johnson was his cousin.

The keys are teamwork, strategy and know-how of cows, and a good cow horse helps.

"Everything you learned on the ranch, throw out the window," Stauffer said, laughing.

The Lukassen/Stauffer team – having competed at Forth Worth, Reno and Las Vegas – will head to Rapid City, S.D., at the end of January and then in March go to a jackpot in Mitchell and perhaps Regionals in Loveland, Colo. They also attend "local" sortings in Cheyenne, Gillette, Douglas and Torrington in Wyoming,

Stauffer said he "had a goal of going 12 times a year, but I ended up going way more than that; we probably go to 20 shows a year," he said, laughing.

Stauffer's wife, Norma is considered the "pit crew." She can read a book, tally points and point out the problem cow.

Lukassen said that "Norma has watched more runs then they have ridden. She is a pretty valuable asset to us."

Stauffer said his wife will advise us "to watch cow No. 5 because he just busted the last four teams. I don't know how she stands it because I couldn't do it."

Ranch sorting, Stauffer said, "It is the most unadvertised sport in the world."

He said the association, called the Ranch Sorting National Championship, is very popular in Colorado, Texas, Louisiana and Oklahoma and gaining popularity throughout the rest of the county.

Ranch sorting became a nationally formalized event in 2007. The event stems from work on the average ranch, where cattle are separated into pens for branding, doctoring or shipping.

It is advertised as a "family fun horse sport" with competition for beginners to professionals.

The handicap system goes from 1-9, and both Lukassen and Stauffer are ranked as 3s – but then almost 60 percent of the sorters are handicapped at 3. There are only about 10 sorters with a 9 handicap.

Recently, Cinch has become a sponsor for the association. The clothing company has given away pickups as prizes and added $20,000 bonuses on some divisions.