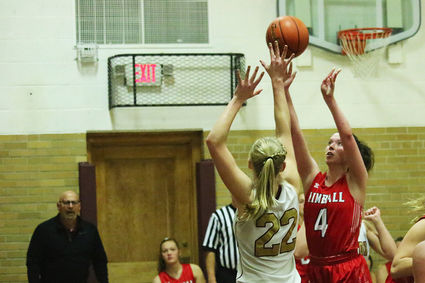 Kimball's Sydney Biesecker connected on six of her eight 3-point shots against Hershey to tie for third place in the Kimball High record books for 3-pointers in a single game. The game also tied a state record for 3-point field goals in a game with 23.

The Kimball High Lady Longhorns lost 64-55 to Hershey in first round play at the SPVA Conference Tournament in action played at the Kimball site Monday evening.

It was truly an entertaining and exciting contest for the fans as it was a long-range shootout with both teams displaying their shooting abilities from behind the 3-point arc and tied a state record with 23 total 3-pointers made!

Kimball connected on 12 treys and Hershey on 11 with sophomore Shayda Vaughn getting a new school record for the Hershey Lady Panthers with 9 to better their old school mark of 6.