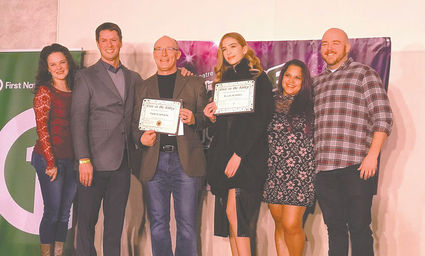 Winning first place in the "Voice in the Valley" competition was Kimball's Tom O'Brien, center, and second went to Ellie Kimmel of Alliance. Joining them are competition judges. From left are Lauren Newell, Patrick Newell, O'Brien, Kimmel, Debby Wagner and Ty Hebbert.

Theatre West sponsored the 2nd annual Voice in the Valley contest Jan. 10-11 and 17-18. Kimball's Tom O'Brien nailed down first place, beating out 20 individuals in the semifinals and four in the finals.

O'Brien said of his win, "It was pretty cool. I had known about it last year but didn't get entered. I thought, 'Why not? I haven't done anything like that.' It was lots of fun."

O'Brien sang a Michael Buble arrangement of a song, "Feelin' Good," for the blind auditions and the semifinals. "Feelin' Good" was from a 1960s musical called "The Roar of the Greasepaint, the Smell of the Crowd."...