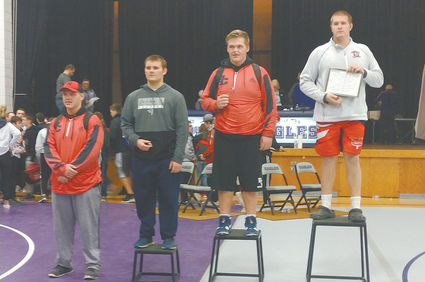 Laura Bateman / For The Observer

Kimball's Stephen Bateman, right, stands on the top level of the award stand after winning the championship of the 285-pound weight class at the Garden County Wrestling Tournament this past Saturday

Coach Wade Brashear said, "The day belonged to Steve. As an unseeded wrestler in the tournament, Steve upset the number one and number two seeded heavyweights to go on to his first individual tournament championship of his high school career."

Coach Brashear went on to say that "Steve has been wrestling very well and it was a testament to his hard work at practice. He has not missed one single practice and has overcome a slow start to the se...