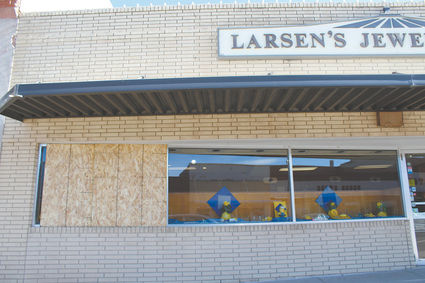 Larsen's Jewelry Store was forced to board up a smashed front window after a burglary Jan. 8.

Kimball's oldest family owned retail business was the site of a burglary on Jan. 8.

Larsen's Jewelry Store dates back to 1926, when O.C. Larsen opened up the store in Kimball. Two years later, O.C.'s son, Delmar Larsen, joined his father in the family business. Now, Delmar's daughter, Karen Robinson, and family own the business.

The business survived a fire in 1963, but this was the first time since it opened its doors in 1926 that it was broken into on Wednesday night, Jan. 8, according to Greg Robinson.

Kimball police responded to the break-in. According to the affidavit, the break-in occurred at about 7:35 p.m. and an eyewitnesses immediately reported the incident.

The affidavit states, "There was a witness who gave a description of the suspects as being two young males, in black or dark hoodies, and one having neck tattoos." The report also says another witness "had just witnessed two individuals fitting the suspect description" run into a house.

Adrian Rodriguez of Kimball was arrested and charged with burglary, a class 2A felony. He was booked into the Kimball County Jail, but has since bonded out of jail.

Greg Robinson said that his mother, Karen, had just left the store when the large north window was smashed with a rock.

Karen Robinson said that "it will take more than broken glass and a couple of missing rings to stop us from serving our customers."

Greg Robinson reported that they have had so much support and encouraging comments from people it was "unbelievable," and he said "it is business as usual."

Due to a conflict of interest, Kimball County Attorney David Wilson will not prosecute the case. Jonathan Stellar from Duel County has been appointed special prosecutor. According to the Motion to Appoint Special Prosecuting Attorney, David Wilson represents Larsen's Jewelry Store in his private practice.