School Board Updated On Improvement Plan 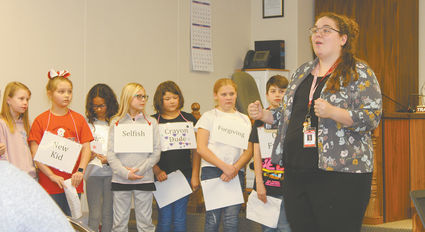 The School Improvement Plan and the ELITE After School Program were the primary focus of the Monday, January 13, Kimball School Board meeting.

Danielle Reader, Curriculum and Instruction Director, presented on the improvements for the Kimball Schools, which include interventions and professional development. Edgenuity and ACT Test Prep top the list of interventions.

Engenuity, which was recently purchased by the school board and is a computer based program, boasts of Individual Learning Plans, interactive lessons and quizzes. According to Reader, all students in grades 7-11 have a plan and most students are required to participate in both the reading and math plans. Intervention time will be 27 minutes long four to five days a week.

The ACT Test Prep for juniors is the other intervention. The John Baylor Program is online and mandatory for juniors. It will take 54 days for the juniors to complete the program.

Prior to the start of second semester, the entire school staff participated in a professional development day that included Edgenuity training and strategies for teaching.

Rounding out the presentation section of the school board meeting was the ELITE After School Program, and director Caitlin Tabor reviewed the previous semester's highlights. Enrollment has topped at 106 students, but generally the attendance hoovers around 60 students daily, Monday-Thursday. Paras help with homework and spelling. Clubs are a popular feature at ELITE. They include drama, community involvement, games, STEM robotics and math clubs.

In board business, the reorganization of the school board went off without a hitch as Heather Norberg was re-elected as president. Vice president is Carrie Tabor and secretary/treasurer will be Matt Shoup. It was reported by Harold Farrar that less in tax revenues have been received this year than last year and the current bank balance is better than last year's balance. January payroll was higher due to the payment required for the six teacher buyouts from last year.

Both principal reports were short due to the Christmas vacation, although Mary Lynch principal's report stated that grades 3-6 would be starting math intervention. Training for this was conducted on January 6 along with the training for Edgenuity. The inservice also focused on reading plans, special education, a Marzano presentation and curriculum work.

According to Hanks, the first semester has ended and report cards will be sent out this week.

The Holiday Festival was a success as was attendance at the movie, "The Grinch."

Principal Mo Hank's report continued with information about the ACT test ,which will be given to all juniors on April 7.

Finally, the board planned to conduct a board work session in the morning and in afternoon Jan. 14 at the Jr/Sr High School. The next regular board meeting will be Monday, February 17.