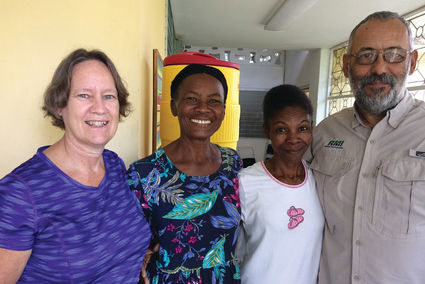 Star Harvie, left, and her husband Greg pose with two Haitians they have come to know. The Harvies lived in Haiti four years and worked with Reciprocal Ministry International. They will lead a team from Kimball to build a house in Haiti.

A team of 10 individuals from the Evangelical Free Church in Kimball are heading south to start their new year off by building a house.

Star and Greg Harvie will lead the team to work for a week in Haiti building a house for a single mother with 5 children.

The cinder block house will be 10 by 20 feet, basically four walls, no plumbing or interior amenities, just a simple structure, although the single mother does own the land that the house will be built on.

The team will leave Denver on Jan. 10 and arrive in Port-au-Prince.

From Port-au-Prince they will take a vehicle to the city of Les Cayes. The distance is only 120 miles, but according to Star Harvie it will take 3 hours to wind through the congested capital, Port-au-Prince, then another 3 to 4 hours through the mountainous countryside.

Port-au-Prince is in the north of Haiti. Les Cayes is in the far south.

The team will work in 80 degree weather with 60 percent to 80 percent humidity.

Star and Greg Harvie are well versed in Haitian culture as they spent four years, 2013-17 working with Reciprocal Ministry International in Haiti, where Greg worked as a mechanic.

Haiti is the poorest country in the Western Hemisphere and one of the poorest in the world. Haiti occupies the western part of the island of Hispaniola, which it shares with the Dominican Republic.

With a population of 10.1 million people in the small country, life is difficult. Most of the people survive through subsistence farming.

The French colonized Haiti and the Haitians speak Haitian Creole, although some of the elite speak English. There are very few job opportunities and the literacy rate is just 60 percent due to the fact that they have no free public education.