By Tom O Connor
The Observer 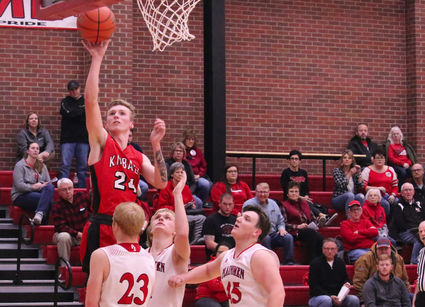 Brendan Walker, talking a shot here against Perkins County, led the Longhorns with 16 points in the 59-44 win over Bayard.

The Kimball High boys are even on the young basketball season at the Christmas break with 3 wins and 3 losses after splitting the final weekend before the break.

On Friday night they battled hard before losing in the final minutes to the hosting Hershey club 57-48, but they came back strong Saturday night at Bayard to win 59-44.

Kimball held their own early at Hershey taking a first quarter lead of 11-9 and led 20-19 at half time. After 3 quarters of play, Hershey led by 1 but then out scored the Longhorns 19 to 10 in the final period for the win.

Once again, the Horns wore down with less depth than Hershey and the chance for victory slipped away in the final minutes.

Not that many fouls called with Kimball whistled for 12 and Hershey for 8. The Panthers won the rebound battle 31 to 26 over Kimball. Other team stats for the Horns saw them with 16 turnovers, 10 steals, 6 blocked shots, and 12 assists.

A strong showing for senior Beau Hanks as the 6'5" post player got the job done inside, and out with 17 points and connected on 4 treys. He led Kimball scoring. Brendan Walker tallied 9 points, Sam Cajero 8, Jacob Withrow 8 with 2 treys, Austin Lulf 3 with 1 trey, and Thomas Muldoon 3 with his trey. Hanks also had 5 blocks for the night and charted 5 rebounds.

Walker led in rebounds with 10 and Withrow had 6. Lulf led in steals with 3. Hershey had two players in double figures with Sage Young high with 15 and Thomas Gosnell 13.

Kimball controlled the game from start to finish at Bayard and coach Mo Hanks used every player on his roster while securing the win over the Tigers. The Horns busted out to a 19-11 lead after the 1st quarter and took care of business despite a good effort by the younger Bayard club.

The Horns show unselfish play and look for the open team mate and ended up charting 16 assists. They shot 34% from the field and were 32% on 3 pointers making 9 of 28 attempts.

They could have shot better at the foul line where they made 10/18 for 55%. They pulled 38 rebounds, had 10 blocked shots, 13 steals, 20 turnovers, and 12 fouls. Too many turnovers but again, remember coach Hanks cleared his bench down to every man on the roster.

Bayard had 9 players score but no one in double figures. Daemon Avilez and Trent Marquez led Bayard with 9 points each. The Tigers are a young team and start 1 senior, 1 junior,

2 sophomores and a very talented freshman in Trent Marquez. They could be a team to watch in the years ahead.

As mentioned, the Horns are 3-3 at the Christmas break but could have possibly been 6-0 had they had the services of Brayden Tyan, a starter from last year who has been recovering from a football surgery but will join the team when play resumes in January, along with Javon Coyle, who was also out with a football injury but saw action for the first time this past weekend.

These two will give coach Hanks that depth he talks about. They will certainly be welcomed as the schedule gets tough again right away with play at South Platte on January 7 and Chase County at home on January 11.

JV Boys: The Kimball JV boys suffered their first loss at Hershey losing 38-27 in 2 quarter action. Thomas Muldoon had 14 points with 2 treys, Cole Henton 5 with 1 trey, Javon Coyle 5, and Cole Heim 3 with a trey. Kimball also lost at Bayard to leave them at 2-2 with Bayard winning 36-30. Coyle tallied 16 with 3 treys, Muldoon had 6, Henton 5, and Heim 3 with his trey.