By Natasha McFaul
The Observer 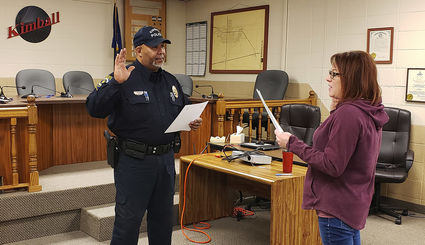 Kimball City Clerk Katherine Terrill swears in new Kimball police offer Joel Mauer on Tuesday at City Hall. The police department is at full strength with six full-timers and two part-timers – and six of them are military veterans.

Mauer is finishing up his last month of training and will start at the police academy in April.

For 12 years he served as a police officer in Massachusetts, including five years under cover. Later he became a corrections officer in Wyoming and Nebraska.

Officer Mauer is a familiar face in town, as he worked at the post office this year. Now with Kimball's Police Department, he brings the staff total to eight.

"Our department is now fully staffed," Police Chief Andrew Bremer told The Observer. "We have six full-time and two part-time. We also have six vets – three Army, two Navy and one Marine.That's pretty good for a city of this size."