The Show Must Go On; Jingle Bell Market Defies Storm 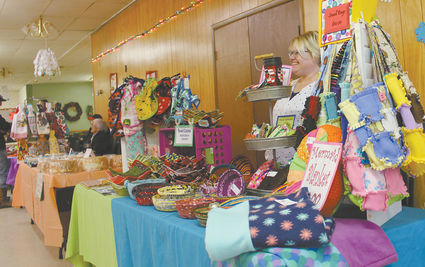 Paper Succulents is a unique type of craft and gift. This is the second year for Sharon Williams, shown at the Jingle Bell Market, creating this original craft.

Local crafters gathered at the Eagles Club last weekend after they had to cancel their original date due to the winter storm after Thanksgiving.

The craft show, Jingle Bell Market in its fourth season, was rescheduled to Saturday, Dec. 7. Unfortunately, 10 vendors who were previously scheduled to attend were unable to commit to the new date, according to organizer Sharon Williams.

The craft fair went from 24 tables to just 13 tables, but a variety of items were displayed and sold.

Among the crafters who rearranged their schedule and helped make the craft show go on were Sharon Williams wi...