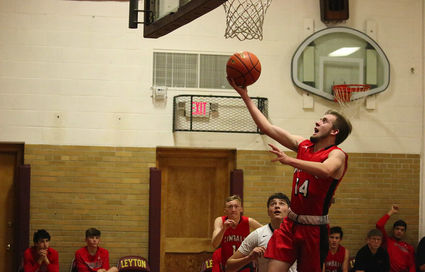 Senior point guard Jacob Withrow drives to the basket during Kimball's Jamboree victory at Leyton. He led the Longhorns with 13 points.

A good showing for the Kimball High boys in the Jamboree game at Leyton Monday evening as they won 49-23. The Jamboree game is a game allowed by the NSAA for all Nebraska teams as a warmup game prior to the start of the regular season and does not count in their win-loss records. It was also a chance for new head coach Mo Hanks to get an idea just what he has to work with this season, although he was without a couple of his key players who are still recovering from football injuries.

One thing for certain, the Longhorns played some good defense in holding the Warrio...