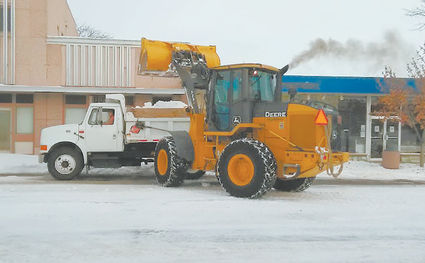 Kimball road crews were busy Monday clearing 2nd Street, above, and other roads of snow piles left over from last week's storms.

Last weekend's severe post-Thanksgiving weather that brought widespread power outages presented challenges for many residents and the departments of the city and county of Kimball that serve them.

The National Weather Service out of Cheyenne reported that one of their automated weather observation systems 7 miles south of Dix had a wind gust of 59 mph at noon Saturday.

According to the meteorologist at the National Weather Service, it was difficult to measure snowfall, but their records indicated that 1 to 4 inches fell across Kimball County.

The weather service also said there was plenty of warning given to area residents, so many people were well prepared.

The storm kept the Kimball Police Department busy and out in force, according to Police Chief Andy Bremer. They were dealing with displaced people, vehicles stuck in the snow and extra street patrols because with the electricity out many security system were not functioning. In addition, they offered to run oxygen to individuals that needed it.

Meanwhile, the extreme conditions forced the cancellation or postponement of all of Saturday's Christmas in Kimball activities. The Parade of Lights and Kimball Ag Society soup supper were canceled, but new times for rescheduled events appear on pages A3 and B3.

A few hiccups did occur during the blizzard. For example, NBC Nebraska and social media chatter mistakenly indicated that space was available for storm victims at Kimball Health Service. KHS has a backup generator, but it basically runs patient rooms, the operating room and the emergency room. The backup generator does not have the capacity to heat the building.

The city of Kimball dealt with large electric outages.

City manager Dan Dean said that he has received "lots of feedback on the electrical issues." He also extended his "apologies for the extended outages."

Kimball's power is provided by Western Area Power Authority, but he said the outages in Kimball were a localized issue.

Dean said he is committed to work on improving the electricity in Kimball. As of Monday, he said that everyone in town has their electricity back on and he "appreciates everyone's patience and cooperation."

Rural residents with High West Energy suffered the consequences of broken power poles, and some members of High West continued to be out of electricity as of Tuesday.

Many rural residents deal with power outages more often than town residents, but for rural families the bathroom becomes a problem because water wells run on electricity. One rural resident with a house full of guests said they repeatedly filled up 5 gallon buckets of water from their hot tub to flush the toilets.

Additional damage caused Kimball County's loss of its north communications tower, which operates the statewide radio system, the sheriff's radio and police department radio. The 300-foot tower collapsed due to ice and wind.

The tower was constructed in 1980 and is inspected annually. All radio systems have been temporarily re-routed on other towers.

All 62 residents and 20 staff members at Kimball County Manor "were safe and sound," according to director Shannon Monheiser.

"The teamwork was amazing as staff members had to cover double shifts and many slept there at the manor," she said.

Although their generator worked for essential items, she said they were forced to "cook by flashlight" because the generator cannot operate all of the equipment.