Most High West Customers Back On Power; Some Could Wait 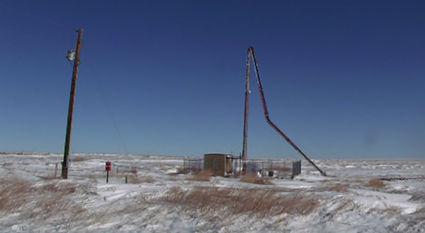 Ice and high winds brought down an important communications tower and tilted a utility pole north of Kimball and east of Highway 71.

As of Monday afternoon, High West Energy said its line crews had restored power to all but about 700 members in the wake of a brutal winter storm.

Some members, however, were expected to be without power until later in the week.

High West line crews were working 16-hour days as a combination of snow, ice and 50 mph winds took a toll on power lines throughout Wyoming, Nebraska and Colorado.

High West has confirmed that the wind broke or damaged more than 150 power poles throughout the cooperative's territory, and it's possible that number could be closer to 200 when employees have completed their final assessment.

As of Monday morning, High West dispatched crews to replace poles and restore electric service to Harrisburg, Peetz, the area west of Sidney, Burns and the area south of Kimball. Crews then quickly moved to begin to address outages in the Dix and Potter areas.

"We sincerely appreciate the patience of our members and their kind words of support for our line crews as High West works to fully recover from this damaging storm," said High West Energy General Manager and CEO Brian Heithoff. "Any prolonged outage creates real challenges for our members, and we encourage them to take whatever steps they can to ensure they have the supplies they need and can stay safe and warm until we restore power."

Based on the widespread extent of the storm's impact and the number of poles that need to be replaced, High West concluded that it was unlikely that the co-op will be able to restore power to all members until later this week. Making predictions is difficult until High West crews have a complete assessment of the damage.