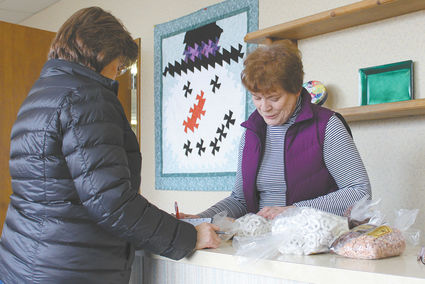 Customers lined up this past week to pay for their final purchases at Carol's Nut List. Above, owner JoAnn Mueller totals up sale items for customer Ann Perry.

Carol's Nut List is in the history books. It is the end of an era of nuts and candy in Kimball.

Owner JoAnn Mueller made her last sales of nuts and candies on the 21st and 22nd of November.

On those final days, the store was busy with Christmas shoppers and, of course, cashew shoppers. JoAnn said that Super Whole Large Cashews #1 were her biggest sellers and the most expensive item over the years.

Naturally, Christmas was her busiest time of year where they sold over a thousand tins and flat baskets throughout the season.

JoAnn Mueller has had the business 33 years after buying into it in 1986.

She expressed her gratefulness for her customers and stressed that she had had such "good help" over the years. She said she will "miss seeing all the people and her customers."

JoAnn said she is looking forward to retirement, enjoying the holidays and working on things that have taken a backseat all these years.