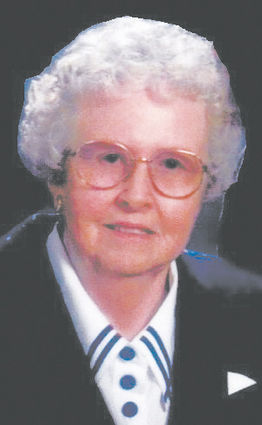 Sylvia I. Soule, 88, of Banner County, died at Emerald Court in Scottsbluff on Friday, November 15, 2019. Funeral services will be held at 10:00 a.m. on Thursday, November 21, 2019 at the Cantrell Funeral Home in Kimball with Pastor Bill Bagley officiating. Burial will be held in the Kimball Cemetery.

Friends may call at the funeral home on Wednesday from 1:00 until 6:00 p.m. Friends may also visit http://www.cantrellfh.com to view the obituary and leave condolences and messages for the family.

Memorials may be given to the Harrisburg Community Church or the Harrisburg Fire Department. The services for Sylvia have been entrusted to the Cantrell Funeral Home.

Sylvia was married to Floyd Soule in Banner County on Nov. 22, 1948. They lived and farmed in Banner County until moving to Harrisburg in 1964. Sylvia worked as a homemaker taking care of her family. She also worked at the Village Inn Café in Harrisburg baking pies and cooking. Sylvia also did babysitting for several families in Harrisburg.

She loved to bake, do needle work and cross stich. She enjoyed traveling to see her family. Sylvia and Floyd enjoyed going to rodeos and the Denver Stock Show. She also enjoyed dancing.

She was preceded in death by her parents, husband and 4 brothers and 3 sisters and daughter-in-law Connie Soule.