Work To Begin On Transit Building 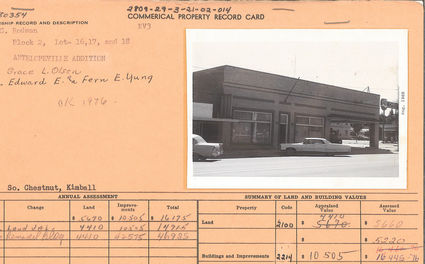 Kimball County Files / For The Observer

The Kimball County commissioners on Tuesday approved a contract for renovation work to begin within 10 days to transform the vacant former auto dealership at 3rd and Chestnut streets into the county transit service's new home. The building is pictured above as part of a 1960s commercial property record.

Now it's not a question of if, but when, Kimball County Transit Service moves into its new home at the corner of 3rd and Chestnut streets in downtown Kimball.

The county commissioners voted, 3-0, on Tuesday to enter into a $1.16 million contract with Anderson-Shaw Construction of Scottsbluff to begin extensive renovations to make the structure viable. The county's 20 percent share of the cost is projected to be $247,918 thanks to federal grant money.

After months of talk, the project appears to be on the fast track. Work was expected on Tuesday to begin within 10 days and, if it stays on time, be completed May 17.

There was much to consider at Tuesday's meeting for this endeavor that some consider too pricey and others believe is just what the growing county transit operation and struggling downtown need.

Commissioners Larry Engstrom, Brandon Mossberg and Daria Anderson-Faden inquired during the discussion about costs, revenues and risks, and in the end they voted unanimously to go for it and try to bring about positive change.

The $1.16 million contract is about $37,000 more than the bid that the commissioners accepted earlier this month. The difference includes about $40,000 needed to cut across Highway 30 to bring utilities to the building, which had been anticipated, and about a $2,500 reduction in light fixture costs.

While the commissioners accepted that bid, they instructed architect Joseph Hewgley & Associates to look for cost cuts before deciding whether to sign a contract.

There were two bids to renovate the building.

The low bid was from Anderson-Shaw for $1.12 million with a $40,000 allowance for bringing utilities to the building. This bid stated 180 days for completion.

The other bid came from Paul Reed out of Scottsbluff. It was for $1.34 million with work finished in 210 days.

Transit administrator Christy Warner said the goal is to park transit vehicles in the building starting in May to avoid bad weather, such as a hailstorm. The vehicles are now parked at various outside locations.

"At the end of the day, the most important piece to this project is the county will only be paying 20 percent of the expenses, roughly $250,000," Warner said. "The transit service will pay rent to the county to recoup the $250,000 and bring in revenue to the county.

"The transit service will also be able to get reimbursed 90 percent of the ongoing expenses of the building, such as utilities and repairs through the operating grant, making this project fiscally responsible."