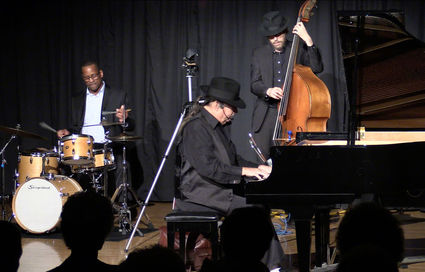 Prime Time Trio members are Bobby van Deusen on piano and vocals, bassist Steve Pikal and drummer Tony Martin. They're coming to Kimball for a show.

The Prime Time Trio featuring Bobby van Deusen at the piano and vocals, bassist Steve Pikal and drummer Tony Martin, will perform at the Henry E. McNees Auditorium on Nov. 23 starting at 7 p.m. as part of the community concert series.

Bobby is a Philadelphia native, and was trained classically at The Eastman School and the Curtis Institute.

In 1976, he turned pro and moved south migrating into the world of Dixieland and jazz piano. For many years he was a regular pianist for Pete Foundation, Al Hirt and other big names in New Orleans. By the 1980s Bobby had become known as a major player and was touring with Sammy Davis Jr.

He is a ham and loves to entertain the audience. His song list is huge, including everything from the Pink Panther and Alley Cat to show tunes from Sound of Music, Phantom, My Fair Lady, Oklahoma, Fiddler and many others.

He offers sing-a-longs with Side By Side, Shine on Harvest Moon, Chattanoga Choo Choo, Sentimental Journey, Tie a Yellow Ribbon and movie themes like Arthur, A Man and A Woman, Peanuts & Moon River. If you enjoy jazz and familiar music, this is a show for you.

Memberships may be purchased at the door prior to the concert or by contacting Karen Morrison at 235-3239 or Susie Abramson at 235-3295.