Sen. Brewer Describes 'Battle Of The Boneyard' In Keynote Speech 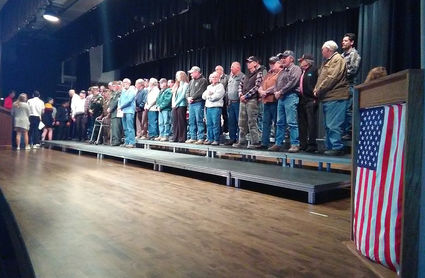 The Kimball High civics class of 2020 sponsored a star-spangled Veterans Day ceremony featuring a captivating keynote speech from state Sen. Tom Brewer, a highly decorated veteran. It was a time to salute veterans, including those on stage at Harry McNees Auditorium, for serving their nation and fellow Americans.

The Veterans Day ceremony at Harry McNees Auditorium in Kimball is a wholehearted display of respect for America and the soldiers who serve it.

For many, it is unconditional. Kimball Mayor Keith Prunty explained that feeling in his remarks.

"We honor all veterans irrespective of the war they served in," he said. He called it a day for reflection to honor veterans and active military personnel who have been "defending us 365 days a year from the Revolution to the War on Terrorism."

One such veteran is state Sen. Tom Brewer of Gordon. In his keynote speech, he graphically detailed his role as an Army commander in the Battle of the Boneyard against the Taliban and militants in Afghanistan. He described being shot several times and suffering eye, arm, lungs, head and leg injuries.

Brewer thanked the fourth-, fifth- and sixth-graders who sang the "Armed Forces Salute" in which veterans in the audience stood up when their branch of the service was saluted.

Before the ceremony, Brewer told the Observer how important it is for communities to recognize Veterans Day as proudly as Kimball does. But many, he said, do not.

Dozens of local veterans, from World War II to the modern era, assembled on the stage in the "Moment of Appreciation" at the end of the ceremony.