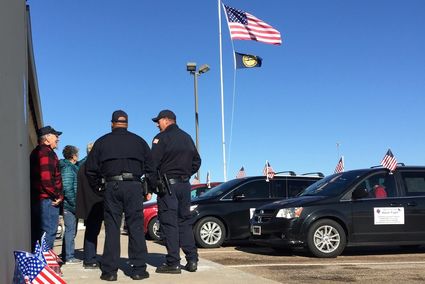 Harvey and Ginger Davis visit Kimball County Visitors Center last week to send off their brother, Gilbert Davis, on an Honor Flight to Washington, D.C., with other visiting veterans also going on the trip. Accompanying them are Virginia McConville, along with Joel Mauer and Andy Bremer of Kimball police. Harvey is a retired Navy veteran who also wants to apply for an Honor Flight to see memorials honoring those who served America. With Veterans Day near, more southern Panhandle patriotism is on the way.

Sen. Tom Brewer of Gordon is a member of the Oglala Lakota Sioux Tribe.  Brewer will speak to Kimball and other area veterans, students, and the public at the annual program, sponsored by the Kimball High School civics class.

After beginning as an enlisted man in the Nebraska Army National Guard, Brewer was commissioned as an infantry officer and airborne ranger.  He then attended the U.S. Army Flight School and served with the Secretary of Defense on the National Airborne Operations Command Center at Offutt Air Force Base near Omaha.

"Our senior class is extremely excited that Sen. Brewer accepted our invitation to speak at our program. We believe that with his experience, he will help honor our veterans and we will be doing the same for him," said Carli Wurdeman, Kimball High School Civics student.

After Brewer served in Operation Desert Storm and multiple combat tours of duty in Operation Enduring Freedom in Afghanistan, he was challenged with injuries that could have held him back. He was awarded two Bronze Star medals and two Purple Heart medals while serving in Afghanistan, one sustained during the Battle of the Boneyard.

Brewer also participated in the Army Marksmanship program. He commanded the Marksmanship Training Center and received many awards, such as the President's 100 Tab, and the Rifle and Pistol Distinguished Marksman awards. To this day, he remains active in hunting and shooting sports.

Brewer is the 43rd District representative of the Nebraska State Legislature. He is proudly the first senator of Native American descent to serve in Nebraska's Unicameral.  He currently serves as Chair of the Government, Military and Veteran Affairs Committee and is a member of the Education Committee. 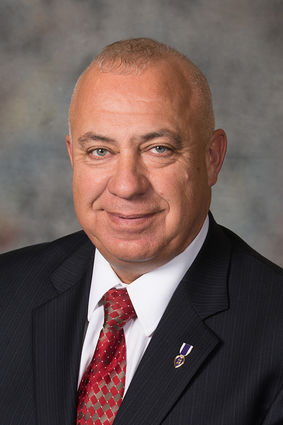 State Sen. Tom Brewer of Gordon will be the featured speaker during the Veterans Day ceremony in Kimball.

Veterans throughout the area will be recognized during the Veteran's Day program. According to Jeri Ferguson, the Kimball High School Civics class instructor, veterans who have not received an invitation letter from the class are asked to call the school at (308) 235-4861 so they may be added to the list. Veterans are also asked to wear their military uniforms if possible.

The Civics class will arrange for transportation for any veteran who requests it, Ferguson said.  Please call the school to make a reservation.

In Harrisburg, Banner County School hosts a breakfast for veterans starting at 7:30 a.m. and a Veterans Day program following at 8:30 .

In Potter, a 10 a.m. Veterans Day ceremony is planned at the high school following a bean feed.