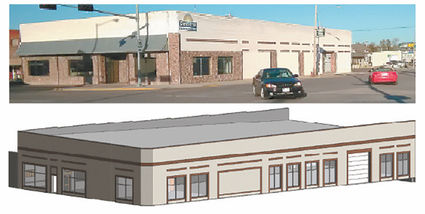 A significant moment in plans to give the growing Kimball County Transit Service a bigger, better home and downtown Kimball a shot in the arm arrives Tuesday, Nov. 5.

Sealed construction bids for the project are to be opened at 10 a.m. during the county commissioners meeting. The intent is to award a contract for all construction to the lowest responsible bidder.

The project involves extensive repairs – from the roof on down – at the commercial building on the northeast corner of 3rd and Chestnut streets in order to make it the new base for county transit.

Originally an auto dealership, it was built in the1920s and has been vacant for more than a decade since the last of its subsequent businesses left.

But some county officials like what they see there. A lot.

The commissioners voted unanimously March 13 to buy the place for $38,500, well knowing that it needed a serious and expensive overhaul. But with a federal grant in hand that would pay 80 percent of the costs to remodel the building, they pulled the trigger. The county is responsible for the other 20 percent.

The exact project cost at this point is uncertain, but transit administrator Christy Warner offered this example to show how costs could break down: With the grant money, if the county would have paid $40,000 fo buy a property and remodeling cost $400,000, the total cost to the county would be $120,000.

In addition, part of the federal funding formula lets the county charge the transit service rent for using the building and then being reimbursed 90 percent of that rent – which pays off the lion's share of the county's remodeling share.

Those kind of numbers, county officials say, represent good value when it comes to giving county transit and government needed space while revitalizing one of Kimball's most prominent street corners.

"We hope the building and service will be something that the community can be proud of for years to come," Warner said.

If all goes well, she hopes construction will last five months and the transit service can set up shop there by summer.

The building is spacious enough to accommodate a growing transit fleet and office staff, and it has enough clearance for the shuttle bus. The parking garage takes up about 75 percent of the building and includes a wash bay.

As it is, Warner said the transit service has a bus and two minivans parked at the county annex building. Two other county vehicles are parked at the courthouse and road department. Staff and public parking also are needed..

The service has three office staff members and eight drivers, plus occasional trainees and part-timers, who will work at 3rd and Chestnut. The staff now works on the courthouse second floor, using the county clerk's election room and the surveyor's office.

"We truly have outgrown our current infrastructure," Warner said.